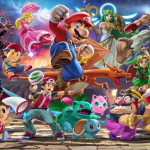 Super Smash Bros. Ultimate, expected in a few weeks on Nintendo Switch, promises to bring the series on a new quality, even from a musical point of view.
Here is the new main theme of the main menu, which we can listen to all & amp; # 8217; internal in the game (you can find it in the player below).
Have you already seen the video that blends Ultimate with Avengers: Infinity War?
Super Smash Bros. Ultimate is scheduled for the upcoming December 7th in exclusive on Nintendo Switch console. If you purchase Super Smash Bros. Ultimate using the My Nintendo points & # 8217; gold by 31st January 2019, you can receive the Plan Piranha as a free downloadable content.
The DLC as a bonus for the first buyers will be released around February 2019.
If you want to know more, you can also retrieve our summary of the latest Direct.