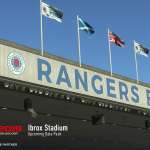 Konami has just confirmed that the legendary stadiums of Glasgow Scottish teams: Celtic and Rangers, will arrive in February on PES 2019 .

I am attaching the first official images of Celtic Park (stadium of Celtic Glasgow) and Ibrox Stadium (stadium Rangers Glasgow).

This is only the last of many updates received by PES 2019 in the past months.

In December In fact, the Data Pack 3.0‚ has arrived, introducing two new stadiums and a series of updated models of game uniforms, balls and shoes.

This update includes the Feyenoord De Kuip Stadium and the historic Stadio Palestra Italia, the latter has hosted the home games of Palmeiras from 1917 to 2010.

Both stadiums, whose capacity is respectively 51,000 and 44,000 seats, are reproduced perfectly in every little detail in day and night modes.