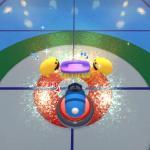 Pac-Man, in the version appreciated in Ralpha splits the Internet, makes its debut in Disney Tsum Tsum Festival .

Disney Tsum Tsum Festival will be available from November 8, 2019 for Nintendo Switch and allows fans around the world to collect and play with their favorite Disney and Pixar characters in their Tsum Tsum form for the first time on consoles.

You can see Pac-Man in action in these new images.

The title includes the classic Tsum Tsum puzzle game and many different activities such as Bubble Hockey, Tsum Hunt and many others, which can be played by (up to) 4 players.

This new version also includes a wide range of Disney characters, including Mickey and Minni, and many party games that can be played by friends and family at home or in portable mode.

The release is scheduled for November 8 for Nintendo Switch.