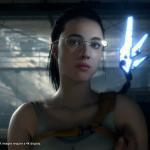 We’ve seen them run on the net for a long time with obscene quality, but finally we have the official images from the Gamescom gameplay of Death Stranding .

In the images, which you find in the gallery below, we can admire in all their splendor not only the protagonist Sam but also Mama and Deadman, among the most recent novelties of the cast.

In addition, we can take a closer look at the Ludens fan, a character unveiled at the Gamescom Opening Night Live that will be modeled on Geoff Keighley’s appearance.

The character will have the voice of another actor, just like Heartman / Nicolas Winding Refn and Deadman / Guillermo del Toro, but it still has some effect to see him in action.

If you want to learn more about the game, to try to understand something about the story or how it actually works, you can consult our latest Death Stranding preview.