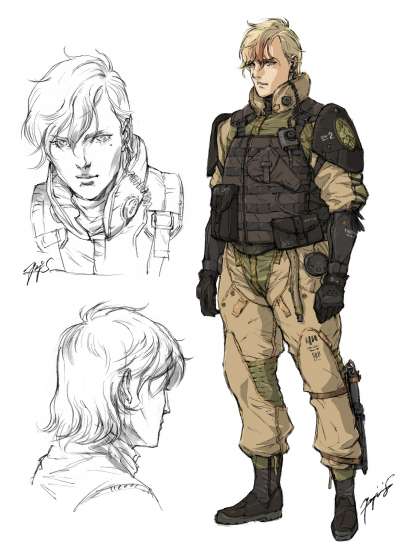 It is now less than a month to debut Left Alive , the new videogame designed by Square Enix that counts among its signatures also that of the artist Yoji Shinkawa . Famous for his work on characters, mechs and scenarios from the Metal Gear series, the artist in force at Kojima Productions spoke about his involvement in the game set in the Front Mission strong>, explaining its procedures for the realization of the protagonists.

Paper and felt-tip pens for Shinkawa

Regarding the supports who uses to work, Shinkawa reveals that does not think he will ever abandon the card . He also works in digital, usually to adjust his works after having imported them with a scanner. Sometimes he works directly on Photoshop, but his preference is clear:

The recent purchase of a iPad has however, pushed Shinkawa to do some sketch directly in digital, more for pleasure than for work:

The involvement in Left Alive

Regarding his works for Left Alive , Shinkawa explained that he worked mainly on the protagonists, after receiving some preliminary information. He then prepared some sketches to put together some ideas:

Important, to meet the needs of developers, constant contact and feedback received, for Shinkawa:

Within three or four attempts for each character, Shinkawa revealed, we arrived at the final look of each:

Recall that Left Alive will arrive on PS4 and PC next March 5, 2019. Will you do it? Have you already looked at our listing for all videos and insights dedicated to the game?