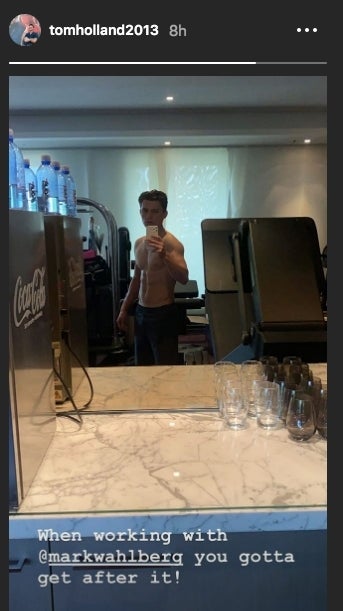 > The Uncharted film, which would have started shooting after months of postponements and various changes of direction (also due to the world health crisis), slowly begins to finally get out of the shadows. The actor Tom Holland – who in the film will play the young Nathan Drake , protagonist of the homonymous series – has in fact published online some photos that show his look as the young explorer.

Just below, the screens taken from Holland’s Instagram stories:

Al cast of the film on Uncharted were recently added Sophia Ali ( Grey’s Anatomy ), Tati Gabrielle (L and terrifying adventures of Sabrina ) and Antonio Banderas , in roles yet to be defined. The only sure thing is that Mark Wahlberg will play the role of Victor “Sully” Sullivan , mentor and close friend of Nathan Drake.

Recently Wahlberg really talked about the relationship between the two characters and the general tone of the film (via CB):

It’s exciting because, without revealing too much, it’s now a sort of origin story. How he and Victor meet and how Nathan becomes the Nathan we all know. He and Sully will meet, and will try not only to improve each other, but also to collaborate and develop their strong friendship relationship. It will be very beautiful. As I read the script, I felt like I was reading Indiana Jones or Thomas Crown Affair. Our project will include these elements from robbery and adventure films, films that I have never been part of.

The screenplay for Uncharted is edited by Art Marcum and Matt Holloway , the duo of authors behind the first chapter of the Iron Man saga (released in 2008 and directed by Jon Favreau).

Produced by Asad Qizilbash and Carter Swan for PlayStation Productions and directed by Ruben Fleischer ( Venom ), Uncharted : The Film will arrive in American theaters on July 16, 2021.

You want to recover Uncharted 4: End of a Thief at a very attractive price ? Click on this offer that you can find on Amazon!