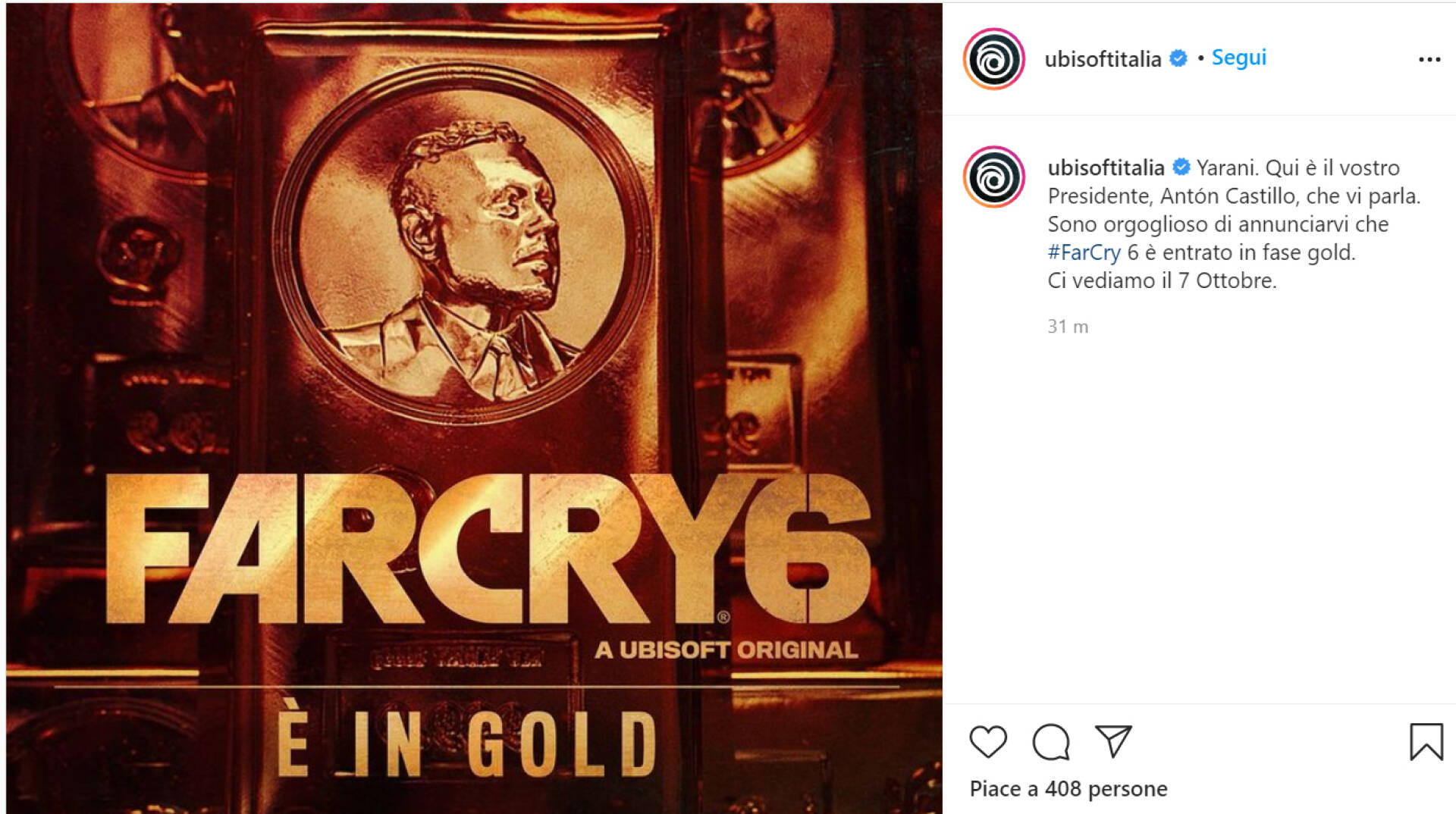 The next chapter of the well-known shooter series produced and developed by Ubisoft, Far Cry 6 , is a game that has the delicate task of relaunch the franchise in the next-gen.

The sixth episode promises to be one of the best of the series, thanks to the characters and a scenically fascinating context (in addition to the presence of Giancarlo Esposito in the role of villain Antón Castillo).

In our test, published a few days ago on the pages of Gameshift , we told you about our impressions after six hours of intense and adrenaline-pumping gameplay.

We also remember that the Season Pass of Far Cry 6 will allow you to play an experience from the point of view of some of the most famous villains of the series.

Now, via Instagram , the French publisher has confirmed that the game has officially entered the Gold phase, with a expected to be released no later than next 7 October .

The social post reads: « Yarani. Here it is your President, Antón Castillo , speaking to you. I am proud to announce that Far Cry 6 has entered the Gold phase. See you on October 7th. »

The official description of the game reads:

he Play as Dani Rojas, Yara’s fighter, and become a guerrilla soldier to liberate the nation.

Fight Antón’s troops in the largest game world in Far Cry history, between the jungle, the beaches and Esperanza, the capital of Yara.

Use makeshift weapons, vehicles and enlist the help of the Amigos, the new mercenary animals ready to overthrow the tyrannical regime

We remind you that by purchasing Far Cry 6 for Xbox One or PS4 you will have the right, if you switch to the new generation of consoles, to get the update for Xbox Series S | X and PS5 in an absolutely free.

Ubisoft therefore preferred to set the record straight regarding its next first person shooter, in response to the controversy surrounding the Horizon sequel.

But if you want to play it on PC, you should know that you won’t have to worry about having a state-of-the-art computer, since the minimum and recommended requirements are affordable.

Finally, did you read that thanks to a Ubisoft initiative that often offers free games, you can finally find out why Far Cry 3 is so successful?

Do you prefer another Ubisoft open world? Check out this great price on Assassin’s Creed Valhalla .