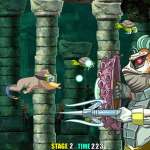 Available from a few days on Nintendo Switch console, the remake of the famous 2D platformer released in the 80s Ã‚ Toki is now shown in a new video gameplay released by the guys of Nindie Spotlight. You can view the movie a little lower, in the usual player.Toki , remember, is a 2D action platform originally released in the arcade in 1989. The Switch version offers a completely redesigned graphics and an orchestral soundtrack. In addition to the standard edition, a “Retrollector Edition” will be commercialized, full of unpublished bonuses Stay in the area because we will soon be able to publish the game review! Source: GoNintendoArticles RelatedToki returns to show off with a new trailerToki gameplay available from today on Nintendo SwitchToki: Announced the release date of the remakeToki, the remake of the classic arcade title announced for Switch