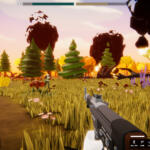 > 505 Games has announced that it has made an appointment for the debut of its Total Tank Simulator , the war video game that simulates some fighting in WWII scenarios – with a gameplay that focuses strongly on physics. The game, developed by Noobz from Poland , will officially arrive on Steam on May 20 . It will allow you to live in a unique way different moments of the history of humanity, putting together both accurate contents and some poetic license to make everything more suitable for a playful enjoyment.

The game was born with a demo that arrived in 2016, which attracted much attention from fans. Subsequently, this demo turned into Total Tank Simulator – which will hit the market with three game modes, dozens of destructible maps and six playable nations, each with its own unique campaign.

Each battle, the authors promise, will be a unique experience for the players and will offer you an excellent replay value – also because you can put together 50 maps, hundreds of units and many historical and detailed weapons. The list price will be equal to 19.99 euros , with a launch discount of 10%.

Just in recent days our Domenico Musicò put his hands on the title to try it: we will tell you how it went in our preview – it is appropriate to say it – on the field.