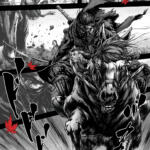 > Ghost of Tsushima is the new and highly anticipated open world title by Sucker Punch, to be released on the PS4 console in July. After being the protagonist of the State of Play for a few weeks ago, Jin’s adventure is now the protagonist of some special posters created by the famous illustrator Takashi Okazaki , author of Afro Samurai.

These, as shown through the PlayStation Official blog , has created four unpublished works of art inspired by the game, each of which depicts a different moment in the story of the protagonist: the gusts of wind that will guide him, the flames that destroy his house, the mask he wears in becoming the Specter and finally the destructive fury to confront the Mongols.

I love making products that I would gladly see or of which I myself would be an admirer. Basically, I like people to get passionate about something thanks to my work. Even before I had the opportunity to collaborate, Ghost of Tsushima was something that had already breached my heart. I love the ‘Gekiga’ manga style and Ghost of Tsushima reminds me of its atmosphere. I took inspiration from this and decided to incorporate it into my work, which I hope you will enjoy!

We remind you that a few days ago the developers Nate Fox and Jason Connell have provided interesting background on their next title coming out on PS4, thanks to the answers given by Sucker Punch to community of players.

If you want to know more about the game, read (or re-read) also our rich preview, in which we told you that the game «has many characteristics of great interest and founds its offer on exploration, on the multifaceted possibilities offered by the combat system and on stealth, and on the personalization of the style of play and its equipment. »

Ghost of Tsushima is expected exclusively on PS4 console on July 17, 2020.

We would like to point out the nfine that on the Amazon the preorder of the expected Ghost of Tsushima is available at a very remarkable price, so you don’t miss out on this promising new adventure set in Feudal Japan.