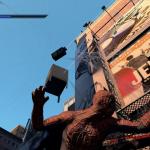 Some of you will remember that Radical Entertainment, during the making of the fourth film chapter of the Spider-Man saga (whose production was then abruptly blocked), had set to work on the video game of the same name.

Part of the assets were then reused for Prototype 2 , before Radical finally left the scene with his failure.

Now, the senior environment & prop artist Wayne Dalton has published some images of Â Spider-Man 4 , which is the game dedicated to the Climbing Mud that never saw the light.

Years later it was the turn of Marvel’s Spider-Man , the title developed by Insomniac Games available exclusively for PS4 consoles.

In our review of the game we were able to tell you that it seemed to be the last effort dedicated to the Arrampicamuri.