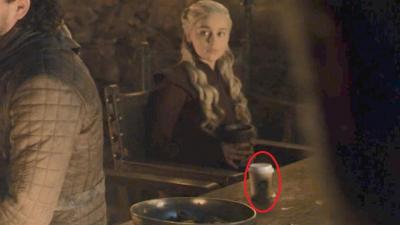 In these hours, the fans are discussing a lot about the progress of Game of Thrones 8 , the final season of the HBO show that will reveal the immutable destiny of the protagonists that viewers have come to love In all these years. Between a speech and another on how the characters are evolving, in the last few hours the issue of the Starbucks cup forgotten on stage, which has gone around the world appearing above all on the table of Winterfell, in the fourth episode of The Throne of Swords 8 .

It sparked ironies and jokes, even from the official profiles and the actress Lena Headey (Cersei Lannister), until today, HBO announced the removal of the cup . In post-production, the company intervened to get rid of the offending glass from the side of Daenerys, so that in future streams (once the new file of the episode was released) and especially in future Blu-Ray and DVD collections the gross inconvenience cannot yet be admired .

You can see, below, a frame of the before and after.

All is well that ends well, in short, even if it did not end very well for the innocent cup.