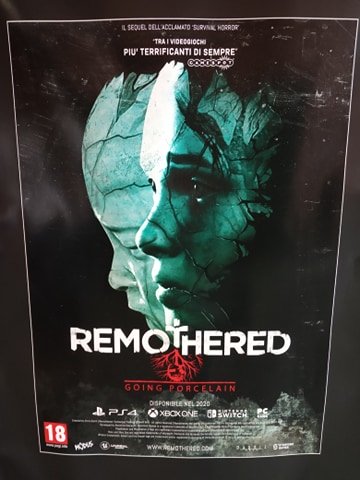 Last April, Modus Games and Darril Arts and Stormwind Games announced that Remothered: Going Porcelain , the second chapter of the psychological horror trilogy started with Remothered: Tormented Fathers , will be launched during 2020 for PC , PlayStation 4 , Xbox One and Nintendo Switch .

Now, directly from Etna Comics 2019, the first official hit poster of the game has appeared, which we obviously haven’t let slip.

Find it a little lower.

We recall that the first chapter was awarded as “Best Italian Videogame of 2018” at the eighth ceremony of the Italian Video Game Awards.

The game is available for PS4, Xbox One and PC, and is expected soon on Nintendo Switch.

Find the review of the first chapter and all the information related to Remothered: Going Porcelain in our sheet.