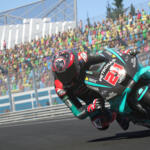 > Two-wheel enthusiasts can now officially get their hands on MotoGP 20 , the new officially licensed video game that lets you find the riders and teams most loved by centaurs all over the world even in virtual . Produced by Milestone and distributed by Koch Media, MotoGP 20 allows you to take on the MotoGP championships or, if you prefer, to start your career on Moto3 , for a gradual climb that will reward your talent with the passing of the seasons. In addition, as we have told in our in-depth review, there is also the possibility of having fun with the managerial mode, in which you will have to give life to your dream team to aim for the highest laurels.

Other features also include graphic editors for personalization , winter and mid-season tests, the importance in the management of asymmetric tires and petrol and the impact of aerodynamic damage.

Milestone made sure to work to get the game out almost two months earlier than the traditional release dates, so that players could enjoy the new season a little early. You can buy the game on PC (also digitally on Steam), on PS4, Xbox One, Google Stadia – and, soon, you can also do it on Nintendo Switch and TIMGames.