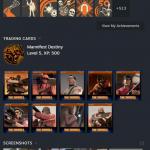 Steam has been preparing a new interface design for some time now, which seems to be closer than ever. According to some images owned by the site Steam Database , in fact, there would be a first look at the next look of Valve’s digital catalog and client.

In the aforementioned images, which we propose below, we actually notice a new interface, which focuses on improved navigability – and which also supports your games with an icon for each.

Furthermore, the Twitter account also offered a short video showing an animation on trading cards in your library:

Loving this hover effect on trading cards in the new library UI. pic.twitter.com/FSvHDYUzY0

How does this new design look like in the works? Do you like it over the current Steam interface?