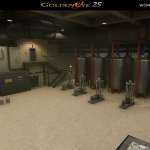 GoldenZen and a team of modders are currently working on an amateur remake of the classic GoldenEye 007 , originally released for Nintendo 64 , made with the Unreal Engine 4 and have published a series of new images to show the current state of the work.

Called Goldeneye 25 , the project aims to recreate the entire campaign single player and developers think to launch the title in August 2022, just in time for the twenty-fifth anniversary.

From what you can see, the goal is to stay as long as possible faithful to the original source, updating the graphic sector and other elements.

What do you think? Did you play the game for N64? Tell us in the comments!
Remember that Goldeneye: Source, another total conversion mod developed with the Source Engine, is currently available and is focused on multiplayer games.