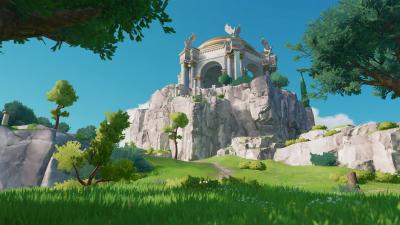 It’s called Gods & Monsters and was the traditional surprise at the end of the Ubisoft conference at E3 2019, a few hours ago. It is a new video game signed by the authors of Assassin’s Creed Odyssey which, thanks to the work in the famous franchise, were able to immerse themselves soul and body in the mythology of Ancient Greece , discovering all the details. This has been a source of inspiration for their new project, as we reported at the time of the announcement.

In an official statement, the transalpine publisher wanted to anticipate more details, emphasizing that the game will be an open world experience in which we will be dealing with dungeons , challenges, treasures, walks andâ € ¦ glide!

“ Ubisoft announces Gods & Monsters TM , a new action and adventure game developed by Ubisoft Q & # xebec ;, the Assassin’s Creed authoring team Â® Odyssey, which will be available worldwide from 25 February 2020 : This open-world fantasy adventure will offer a wonderful pictorial graphic style, immersing players in a fantasy world, where they can exploit their divine abilities to defeat some famous mythological creatures and save the Olympian gods on a heroic journey in history “the communiqué begins.

“ In Gods & Monsters, players will play Fenyx , a forgotten hero engaged in a mission to restore power to the ancient gods of Greece, after it was stolen from Typhoon , the most lethal creature in Greek mythology, players will explore the Isle of the Blessed and demonstrate their heroism by facing some deadly mythological creatures, including fierce Gorgons, ruthless Harpies and powerful Cyclops: equipped with special powers received as a gift by the Olympians, they will have to overcome dangerous dungeons, face challenging trials and perform heroic deeds to save them.

Deep down, Gods & Monsters is a fairytale adventure set a lively and colorful open world . Players will move freely on the ground and glide in the air , taking advantage of their extraordinary abilities to explore this world full of surprises, epic battles, missions and fantasy creatures. The journey will be as challenging and rewarding as the final destination when players become true heroes. “

The game will land on PC, PlayStation 4, Xbox One and Nintendo Switch. Furthermore, it will be part of the Uplay + catalog on Windows PC, which with a monthly fee will allow access to the latest Ubisoft releases and a catalog of classics.

As it seems Gods & Monsters ?