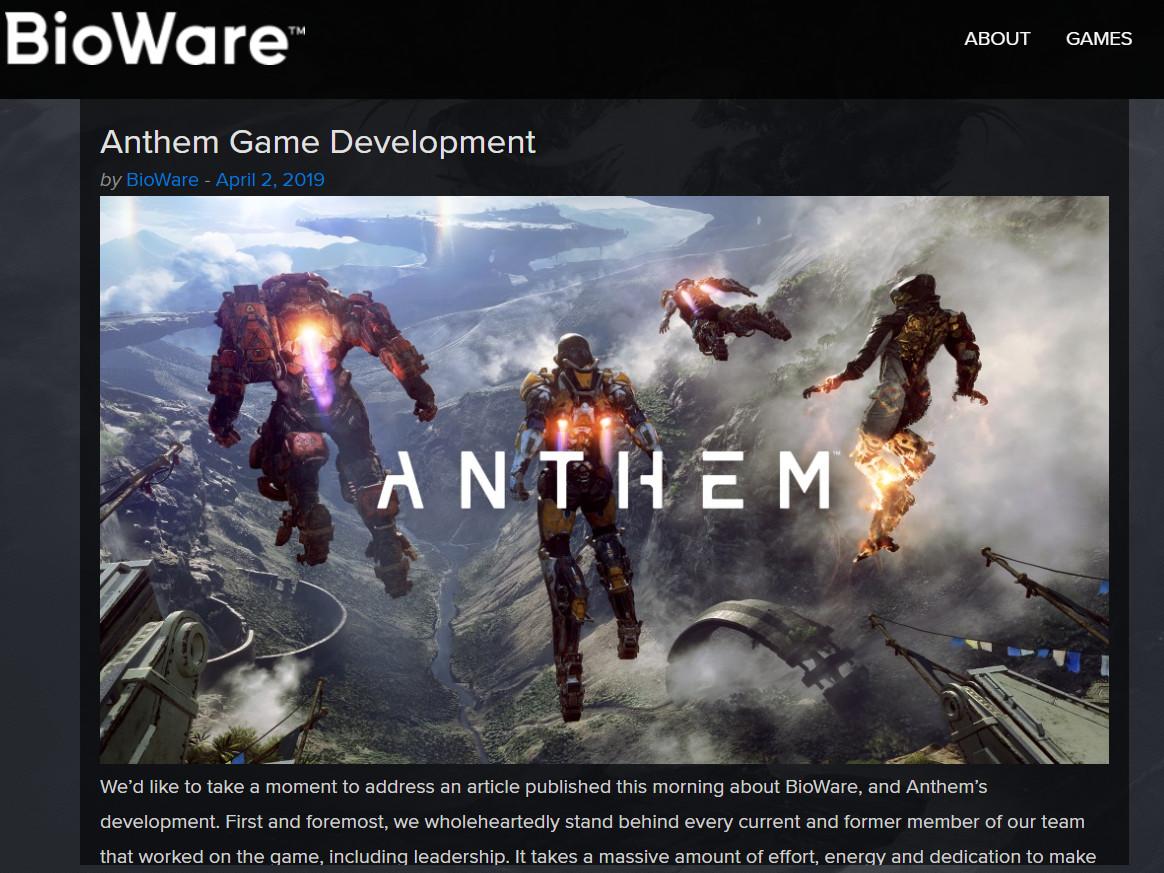 Later in the day, we published a lot of news about a Kotaku article on BioWare and the development of Anthem, the new IP published by the study this year.

A part of the article that we have not dealt with is the one that explores the status of the team that has been dealing with the game for years and years, subjected, read, to many hours of overtime to complete the project .

This would have happened to the detriment of the physical and mental health of several developers, Kotaku , who would not have left BioWare prey to the depression and anxiety achieved during these years of employment. / p>

While reporting this story, I learned the names of people and people of people who have left BioWare over the past two years. Those who talked to me believe that something desperately needs change, and that they hope it public will help. pic.twitter.com/69wz58w9ZJ

The Canadian software house wanted to respond with a long post published on its official blog, explaining that it did not want to comment in the article because it proposes an incorrect focus on specific members of the team. “

“First of all, we wholeheartedly support every current and former member of our team who has worked on the game, including leadership,” explained the study of Anthem .

“It takes a tremendous amount of effort, energy and dedication to make every game, and doing Anthem would not have been possible without the efforts of each of us”.

“We chose”, continues the open letter, “not to comment or take part in this story because we felt that there was an incorrect focus on specific team members and leaders , who did their best to bring this totally new idea to the fans. We didn’t want to be part of something that was trying to take them down as individuals “.

“We place a great emphasis on our culture as a workplace in our studies. The health and well-being of our team members is something we take seriously.

(â €) We listen to the criticisms that have been raised by people in today’s piece, and we take them into consideration along with the feedback we receive from our internal polls. We focus a lot on planning better to avoid crunch time, and this was not a major topic in the feedback leaked from our post mortems “.

BioWare adds, in the post signed on behalf of the whole company, that “we accept any criticism that will come for the games we play, especially from our players. The creative process is often difficult (â €) but the reward of bringing something we have created into our players’ hands is incredible “.

“People in this industry put so much passion and energy into doing something fun. We don’t see value in throwing each other down, or someone else’s job. We don’t believe that articles like this make our industry and art better “.

A surely very hard answer that does nothing but cast shadows on the last years of BioWare, which are not spun smooth between the reception at Anthem and Mass Effect Andromeda.

For his part, Jason Schreier called the reaction “cowardly” on Twitter, and on the same social network, with his retweet, came the reaction of a former employee who confirmed everything.

“They were so angry and sad at the time,” they said. Said another: “Depression and anxiety are an epidemic within Bioware.”

Co-signed me, a person who left BioWare in 2017 with massive depression and anxiety that has taken me to get through and recover from.

We don’t believe there will be other statements from BioWare but the controversy on the net, as it was for Rockstar Games at the time of the launch of Red Dead Redemption 2, will certainly not end here.