There is a passion that has always distinguished humans: speed. Since he invented the wheel, the man tried to create the means to go faster and faster, to shorten the distance of the world and, above all, to get a thrill. Because – since the days of Ben Hur to those of Ayrton Senna – Racing has always been excited.
Feel the 450 horsepower of a V8 prancing in our guts, however, is not part of everyday life and motoring in general, it is a sport for the few. Not surprisingly, therefore, that there are many fans in the world willing to invest their time and their money in the creation of a surrogate, a tool that is capable – at least partly – to reconstruct the emotions of the track. Project CARS is a game that was born out of this, the passion of a large group of maniacs engine under the leadership of a talented development team, Slightly Mad Studios.
After a gestation to say the least troubled, the project has finally taken shape. Tomorrow Project CARS will be delivered to the community that has supported him all this time, and we were fortunate to be able to play a few days in advance.

As the track
The Gordian knot of Project CARS is found in appearance simulation. This idea started as simulation, and as such has been formed to provide a deeper level of likelihood of the cars and their behavior on the asphalt. It does not take a few moments to figure out what this feature is central: Project CARS allows players to act on every detail buoyancy, the characteristics of the race and the track conditions, with results that are reflected in the game conspicuously. In short, every action performed by the player in the preparatory phase influence the handling of the car, and the conditions of the race forcing the pilot to make extensive changes to your driving style. During the race the tires deteriorate, the track is dirty and with every turn control of the car undergoes changes. The curve that two or three laps before you had faced in the fourth gas opened slowly becomes more rugged and forces you to keep a high level of concentration. You must learn to “listen” to the car, to understand their behavior and to understand how to react quickly to the slightest sign of loss of control. Project CARS is a title that puts a strain on your nerves, your brain and that can provoke a strong physical fatigue. You will not find buffeted by G side of a curve taken with too much vehemence, but after 24 laps in the Indy circuit at Brands Hatch your arms will be sore and will need to take a break. Like a real pilot.
Although Project CARS is designed to offer a high level of simulation, we were greatly surprised by the large scale of this aspect. Early in the game we are offered three presets, ranging from the more arcade driving through an intermediate rail, to finish on the lead as a professional. It may seem blasphemous, but at a semi-pro, not only we were able to play with a pad, but we also enjoyed finding some of that feeling tried a few hours earlier at the height of difficulty and with his wrists still aching for a force feedback too violent on our wheel. There is a clear intention by slighltly Mad Studios to open up to a wider audience than the corsaioli gamers, and scalability has made in such a way to please all really. Of course, those coming from arcade experience could be traumatized by more realistic physics to even higher difficulty accessible, but generally do not test that nagging feeling of being behind the wheel of a fire-breathing dragon ungovernable even when you’re driving a Renault Megane . With a little ‘common sense and with the aid offered by the game, in short, you can unscathed the first violent impact with the world of racing simulation.

Many content
If you are fond of the single player, Project CARS offers an extensive career with three goals. You can choose to become a hero from scratch, to earn fame, prestige and self increasingly challenging over the seasons. Alternatively, you can play the role of champion and defend his title. Or, you can try to become a pilot versatile, proving to be the strongest in three different disciplines. The developers have decided to hold the grinding featured in countless games of cars offering right now all vehicles to the player. Even in career Become a Legend, which puts us in the shoes of a nobody, you do not need from the kart: if you want to start with a few more horsepower, you can choose a higher class and start your career from there. In this field, therefore, Slightly Mad Studios has chosen to give carte blanche to the player, allowing them to shape the single player experience that most deisdera.
It should be emphasized that the career is extremely careful, and is accompanied by a kind of parody of Twitter that shows us what our fans in real time, as well as press reports and letters of our team, our managers and any teams interested in us to sign a contract.
Complements the single player mode free run that allows us to customize the game in every detail and, ultimately proves to be a fundamental tool for learning tracks and cars available in the game.
Staying on the subject of the single player, you have to talk about the good quality of artificial intelligence. Completely scalable, high levels of difficulty becomes really difficult to stand up to the fastest riders, and in general we noticed with pleasure that many cars controlled by the CPU tend to dare to go beyond their limits and mistakes, sinning only too correct in some breakers. You happen to find car sideways, coming taken to sportellate or attend behaviors particularly realistic, but never be in front of opponents really annoying. Project CARS will rediscover the joy of arriving sixth after starting from tenth position in the starting grid, in a long battle for the fifth time for three laps. Even in defeat, this game will allow you to enjoy your driving skills.
A word, finally, on the collision system: improved conspicuously than build last year, the car behaves positively predictable in front of an impact. Do not expect cars to pieces: to the usual licensing problems, the destructibility vehicle has major limitations. The system of the damage, however, is very realistic and it happened more than once to park on the track to a mechanical failure or a runaway who has literally exploded the engine.

As for the multiplayer, either symmetrical or asymmetrical, at the moment we can only spend just a few words. Dedicated servers will indeed be activated at the time of the launch of the game, as well as online leaderboards, races against time in the ghosts of other players and the daily challenges. In any case, in multiplayer games that we have played we have noticed a big correctness of the participants and a major change in the code of the game, it becomes much more severe with those who have a driving too aggressively and with whom, in general, try to ruin party to the other. Hopefully when the game will open to the general public contain this system knows who will launch in multiplayer Project CARS convinced to play Burnout and that, in general, the community knows how to maintain the same level of sportsmanship seen at this early stage. All in all, we are confident.
The fleet and the number of locations in the game is more than good. We speak of 31 circuits, many of which present different variations, and 65 cars, almost all well-distinct from each other. The driving pattern of each car is made with care, and there are cars that are driven in the same way, even those most similar to each other. Many cars in the game are made under license and with attention to every detail, but there is also a number of cars produced by the community during construction and included in the final game: we would certainly welcome some license and a few more cars appealing to those present. In general, there is an excessive number of prototypes (well 11) and missing many important brands. But, for the variety of driving patterns proposed, we can be satisfied. Finally, there is no real editor of liveries and color of the cars, a lack that, at least on PC, should meet Steam Workshop and the great community behind this project.

Watching the sunset
All this is achieved with a graphics lovely. During these long months of development the team has finished Project CARS to make it a game really splendid, offering some excellent views and emotions with its ski. The cycle day and night and the weather, which can be adjusted to change during the race or even to follow the real condition of the track downloaded from the Internet, allowing a truly breathtaking graphics performance. The car, as mentioned, are extremely elegant interiors and exteriors and the sound of the engines did not fail to cause us a few thrills. If you can, you play with a great pair of headphones over his ears: even with the muffled sound of the view that simulates the view from inside the helmet will have the chance to enjoy the sound of your engine. 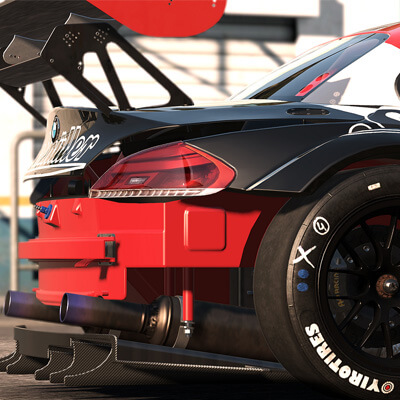 Project CARS, with the largest selection of tracks of any other racing game, a unique system of dynamic weather conditions and the cycle of the day, in-depth processing functions and pit stops, support for Oculus Rift and a resolution in ultra HD 12K , it makes the dust to all rivals.