The Formula 1 championship approaching the summer break is confirming the values ​​seen in 2014: the Mercedes flying, enemy only of themselves and of the Cold War between internal Hamilton and Rosberg, with Ferrari and Williams to act as a sparring partner and poor Alonso dark and hunched behind the wheel of a McLaren disastrous and dysfunctional.
Videoludicamente speaking, 2015 was mentioned as the year of the landing of the next-gen simulation official license; we have waited for the pass Codemasters, loads of hype and expectations after a F1 2014 unsatisfactory. We paid off? Not entirely.

You’ll never career!
Let’s go and begin to justify the vote just above sufficiency, starting with the game modes. As now even the pebbles Spa know, F1 2015 proposes the predecessors in this career: no creation of his alter ego, no progress spread over several years, or evolution of the car or confrontation with teammate. All it washed away, without a logical reason.
The meager menu alongside the race fastest two different ways to approach a complete championship: the “Season of the championship”, whose settings are at the discretion of the player, and the “Season Pro” variant much more hard-core when everything is configured the most difficult and there is no room for choice: it runs in complete sessions (races 100%), without driving aids and with the view locked cockpit. An approach by real purists that requires, in addition to a good deal of time and patience, even a great wheel.
If we consider the “Pro Season” attractive to a small circle of audience, the player “average” will be in hand substantially only the “Season”, whose core is based on the mere advancing Grand Prix after Grand Prix. A punch to the longevity, in short, that is likely to lead many to leave the game earlier than what happened with the other versions. Moreover, the career is in good company: it disappeared also the cooperative multiplayer mode, no less important, but still appreciated by a fair slice of the community; that community, meanwhile, wasted no time and raised his voice in the channels of communication with Codemasters. How to blame her.
Of note, to tell the truth, the presence of the Championship in 2014 fully playable: what would be an added value not just, however, it becomes a little sweetener, useful if only to afford to take even in Germany (canceled this stage ‘ by calendar year).

Between TV and assorted bugs
Launched a fast race you will come across some small additions to outline long claimed. The presentation brings the debut of a television commentator (no, neither Charles nor Gianfranco Mazzoni Vanzini unfortunately) and, above all, the long-awaited ceremony on the podium. The atmosphere gains, as the voice-over is limited to the introduction of various sessions and summary. Noteworthy about the sessions, an attractive return and an introduction: the free practice in their entirety and the opportunity to follow the pilots opponents via the camera car while you are comfortably seated on his car.

At the green light, however, all these trappings give way to a series of bugs often funny, often just annoying. Among absurd times in qualifying (we happened to see the Q1 Rosberg close to Monza with a time of 59 seconds flat), trains at the entrance to the pits due contemporary pilots of the same team and Lotus that the level of difficulty sverniciano maximum straightline even the best Mercedes, the game offers a sampling of glitches and bad optimizations worthy of a beta version. Of course, nothing that can not be solved with a series of patches, but at the time of this writing is a serious problem that inevitably affect the final judgment. Just as we can not bring back the lack of safety car: we tried in every way, believe it, but even with the worst Maldonado we managed to get out of the damn AMG, also because of the physical damage, although less permissive, remains fairly surface.
It ‘a terrible shame that F1 2015 present these shortcomings, because the track driving sensations are good. Taken over a single lap, the gameplay shows muscles giving impassioned what you expect from your engine turbo V6 hybrid that, compared to the 2014 season, earned in horses and battery efficiency with the resulting consequences in terms of performance ( we talk about a return of about 2 seconds per lap). The car is agile, fast straights and strung acceleration, drivable by anyone thanks to the usual scale of aid. Granted that obviously the best user experience is achieved with a good steering wheel with force feedback, the pad can fulfill his duty very well as long as you turn the traction control.
The differences compared to F1 in 2014 are evident right from the first corner, when we perceive a more substantial improvement: braking is much more “modulated” and kind, dramatically reducing the risk of blocking and allowing us to finally give up the ABS. This adjustment is reflected in the wet, where being competitive with major difficulties is no longer a pipe dream.
In short, the progress on the gameplay, there are, as well as some confirmations (see the excellent simulation of tire wear and stints) and Codemasters seems to have also implemented the feedback from the community regarding the IA, now aggressive and committing human errors, and in retiring with mechanical problems, giving the races a bit of unpredictability. But at what price? The idea is that they have been sacrificed aspects from the very high specific weight (career mode on all) to focus on others of the same caliber and exit as well on the market in mid-season, as promised after the release of F1 2014. And ‘evident that, on balance, the game is not totally worth the candle, if the final perception is of being in front of an unfinished product.

Team radio for Vettel
If you look for the true next-gen form of driving simulation, here you’ll find it only in part. F1 2015 is pushed again EGO Engine that, albeit squeezed to the last drop, remains an engine born and conceived for the past generation. Fortunately, at least from this point of view, Codemasters saves the cabin, because despite all the graphic impact as a whole is satisfactory. The biggest advantage, of course, is the guarantee of fluency in any situation. PS4 version (the one used for the review), traveling is a pleasure to 1080p and 60 fps, providing good care in the reproduction of liveries and antialiasing usually enough, except for a few hiccups in the tracks “complex” or the frame rate mirrors mirrors. PC things go in a bit better thanks to the post-filter process and a yield of reflections more realistic, provided you have the appropriate hardware to shoot everything at the highest level of detail.
The sound department is perhaps the one that has enjoyed major innovations, starting with communications with the engineer in the pits. At any time during the session by pressing the appropriate button on the pad you can request information on the track, weather, conditions of the car drivers and opponents, either through a multiple choice you are speaking directly into the microphone of your head in September Once memorized keywords, becomes a feature more useful than you might initially imagine. Of course, it remains borderline considering bans imposed by the FIA ​​concerning radio team, but it’s a detail.
Worthy of reporting, then, the bug fix that funestava the roar of the engine at high rpm, defect, especially in the last year’s version, not a little complicated life in the gear change.
Negative notes on the front instead multiplayer online: today matchmaking tremendously hard to find a lobby available and there are reports of sporadic bug in the rankings. More work for developers, in short: from here to the end of season time for fixare the biggest flaws is not lacking. 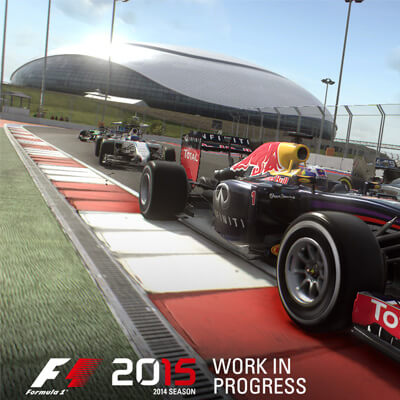 Ride like a champion in F1 2015: closer than ever before to the experience of running in the race car most fascinating, exciting and prestigious in the world.